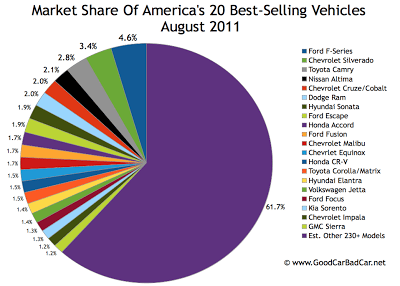 Home
Top Level Reports
Marketshare
America’s 20 best-selling vehicles were responsible for 38.3% of all new vehicle sales in August 2011. That’s down from the 39.2% of the market enjoyed by July’s 20 best-selling vehicles. The 20 vehicles which make up the best sellers list are a bit different, too, as the Chevrolet Impala, GMC Sierra, and Kia Sorento join the pack while the Chevrolet Traverse, Honda Civic, and Jeep Wrangler depart from the hallowed presence of the popular gang.

Among the USA’s 20 most popular vehicles you’ll find four pickup trucks and four utility vehicles. 60% of the list is formed by products which wear domestic badges. The Toyota Camry, Nissan Altima, Hyundai Sonata, Honda Accord, Hyundai Elantra are made in America. The Honda CR-V is imported, but the Toyota Corolla and Volkswagen Jetta don’t have far to travel – they’re from Canada and Mexico, respectively.

The market share achieved by each of America’s 20 best-selling vehicles in August 2011 can be viewed in the chart below. Leading the way as the best-selling vehicle in America is the Ford F-Series. Its 48,795 August sales represented 4.6% of all new vehicle sales in the United States.