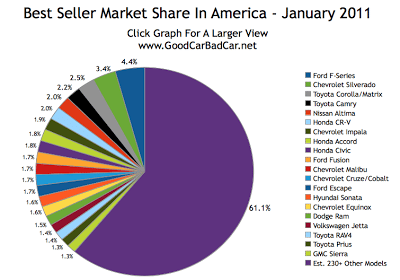 Home
Top Level Reports
Marketshare
America’s 20 most popular vehicles combined for 38.9% market share in January 2011. Despite totalling approximately 8% of all nameplates, these twenty vehicles were responsible for nearly four out of every ten of the 819,938 new automobiles sold in the first month of 2011.

The Ford F-Series led the way with 4.4% of all new vehicle sales last month. When grouped with the Chevrolet Silverado, Dodge Ram, and GMC Sierra, America’s full-size trucks grabbed more than ten out of every 100 new vehicle buyers.