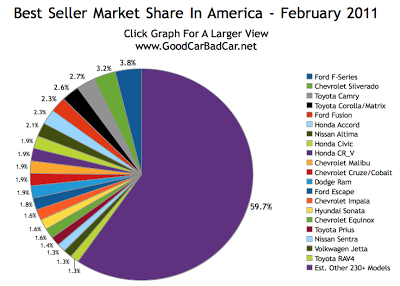 Home
Top Level Reports
Marketshare
America’s 20 best-selling vehicles were slightly more dominant in February 2011 than in January and are ever so slightly more car-oriented, as well. 13 of the 20 most popular vehicles in February are cars. That’s up from 12 in January.

Still the most successful seller, the Ford F-Series’ market share dropped from 4.4% in January to 3.8% in February. Still, 38 out of every thousand automobiles sold is…. impressive, to say the least. F-Series sales were up 14.1%. The best-selling utility vehicle in the USA was only the eighth best-selling vehicle overall. Honda CR-V sales jumped 61.4% in February. Only three other utility vehicles found their way onto the list of America’s 20 Best-Selling Vehicles in February 2011. 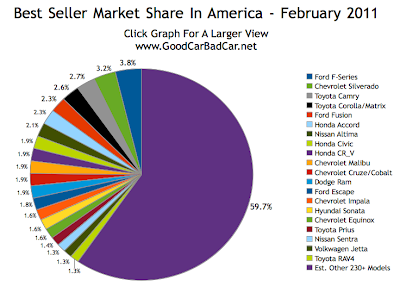