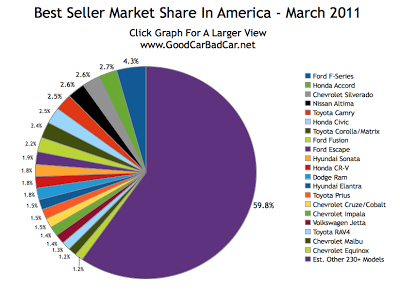 Home
Top Level Reports
Marketshare
America’s popular vehicles were actually a little less popular in March 2011 than in February. The rest of the market made up 59.8% of overall sales; up from 59.7% in February. 4.3% of all new vehicles sold in the United States in March were Ford F-Series pickups. The Honda Accord, the best-selling car in America last month, was way back of the F-Series with 2.7% market share, still a pretty fair improvement for the Accord compared with February.

So far this year, through the first quarter of 2011, Ford has sold 126,627 F-Series trucks. While you’ll be hearing plenty about Ford’s ability to finally sell the fuel-efficient Fiesta in high numbers – a truth which I’m not encouraging you to ignore – what you won’t necessarily hear about is Ford’s ability to sell more Escapes in one month than they can sell Fiestas in three months; or Ford’s ability to do the same with the Fusion. That doesn’t make the Fiesta unsuccessful, not at all. The littlest Ford ranked among America’s best-selling cars in March. But you don’t see the Fiesta in this Graph, what with its .785% market share. What you do see are three Fords, all of which are bigger than the Fiesta and use significantly more fuel, and 17 other vehicles, all of which are bigger than the Fiesta, as well.

Has America embraced the subcompact culture of fuel efficiency and easy parkability? Based on this chart, er… no. Only one-fifth of the vehicles shown below will be displayed in GoodCarBadCar.net’s Small Car chart. One of those cars, the Volkswagen Jetta, isn’t really that small. The Hyundai Elantra is officially classified as a midsize car. Both are, however, capable of putting up stellar fuel economy numbers, as are the Honda Civic, Toyota Corolla, and Chevrolet Cruze.