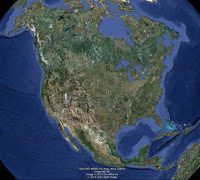 Every single vehicle in this market share chart of America’s 20 best-sellers was manufactured in North America. Some are Canadians, some are Mexicans, ten are badged as Detroit vehicles: Fords, Chevrolets, and Dodges.

Together, they were responsible for 40% of all new vehicle sales in the United States in April 2011. To come up with the other 60% of new vehicle sales, you need to see the figures for more than ten times the number of models. You follow? More than 230 nameplates grabbed 60% of the market. 20 nameplates grabbed 40% of the market. The vehicles you see in the pie chart below are uber-popular.

None more so than the Ford F-Series. With 3.92% of the overall market, the F-Series lost a few tenths of a percentage point compared with March, but still out-sold the Toyota Camry by about 15,000 units. Together, the Chevrolet Silverado and GMC Sierra owned 3.44% of the market. Speaking of unity, the Chrysler Town & Country and Dodge Grand Caravan – if calculated as one minivan –  held 1.52% market share in April and would slot in  behind the Dodge Ram with 17,635 sales, just 45 units behind their pickup brother. General Motors sold one out of every five vehicles in April. The Chrysler Group sold one in ten. 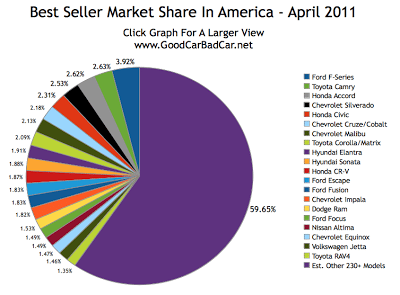