41% of America’s new vehicle market in June 2011 was owned by the 20 most popular vehicles on sale. 11 out of every 100 vehicles sold was one of four domestic full-size trucks: the Ford F-Series, Chevrolet Silverado, Dodge Ram, and GMC Sierra.

The six most popular nameplates in June were American, three Fords and three Chevrolets. Only two in the top 10 weren’t American, the Kentucky-built (but Japanese badge-wearing) Toyota Camry and the Korean (but Alabama-built) Hyundai Elantra.

13 of the Top 20 best-selling vehicles in America in June 2011 were passenger cars in the traditional sense, only three were SUVs, all three being soft-roaders. As you know, more than half of all vehicles sold in the United States last month were Detroit Three products, up from 44% in June 2011. Thus, to see this list dominated by U.S. trucks, two of Detroit’s SUVs, and five of its cars isn’t surprising. But for the factories that assemble these vehicles, it’s awfully encouraging.

The market share chart for America’s 20 best-selling vehicles from June is below. 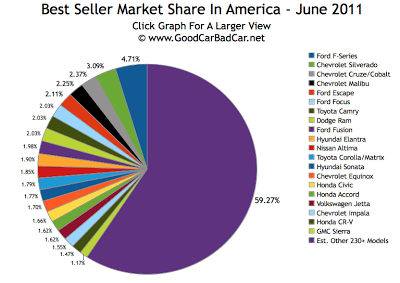