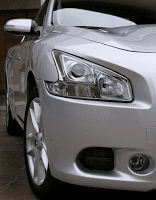 As already mentioned, the 2010 Jaguar XJ has been such a hit for Jaguar that the less-expensive and similarly-modern Jaguar XF is selling at lower volumes. XF sales were cut in half in September 2010, XJ sales jumped an astounding 707% over the old-style Jaguar XJ.

Still, the XJ is by no means the most popular car in its category. Mercedes-Benz S-Class sales in September were up 55.2% and the BMW 7-Series has the Benz beaten by 21 units year-to-date. The dreadfully ugly but wickedly rapid Porsche Panamera is a hot seller, too. Behind the Panamera by 2852 sales through the first three-quarters of 2010, the Jaguar won’t be making up that gap before New Year’s Eve. Then take into account the Lexus LS’s 8827 sales. Ignore the Audi A8 – however desirable we paupers find it, the wealthy ignore it.
In the mainstream Large Car category, a Graph which The Good Car Guy also fills with the Cadillac DTS and Lincoln Town Car, it certainly helps to be domestic. Well, only four of the cars listed are Japanese or Korean, but still, it’s interesting to notice that of the 48,339 non-premium large cars sold in the United States in September 2010, more than 40,000 were domestics. Strangely, Lincoln Town Car sales were up 149%, perhaps as a result of news that the next Lincoln limo will be the nasally Lincoln MKT. The Town Car wasn’t much loved ’round here.
The facts also provoke me to ask the question: why did 4856 buyers choose the oddly-designed Nissan Maxima when the Infiniti G37 was available for $140.00 more? For the winter benefits of front-wheel drive? C’mon. In the U.S. sales war you knew nothing about, “Nissan Maxima vs Infiniti G37”, the G37 sedan was left with only 3056 sales in September. G37 coupes bumped up the total thanks to an extra 1366 sales. 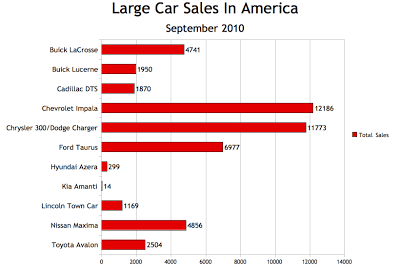 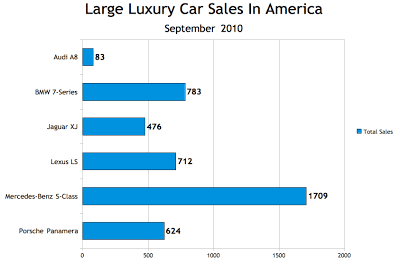