With market share in the first three months of 2011 at 26.4%, Nissan (and corporate partner Renault) are more dominant in Mexico than General Motors or Ford are in the United States; more dominant than Volkswagen and its group partners are in Great Britain. In quarter one of 2010, Nissan/Renault’s market share in Mexico was 25.4%. And if March 2011’s 26.5% market share is anything to go by, Nissan/Renault are on the upswing, setting aside any production/supply issues that may have become apparent for Nissan, Mexico’s favourite car brand, in the spring.

Compared with Q1 of 2010, General Motors has slid a full percentage point from its former 19.2% hold on the market. Volkswagen, Audi, Seat, and Porsche have improved their portion from the 15.6% the quartet achieved in the first three months of 2010 to 17.3% this year. We’ve already explored the difficulties facing Ford when ranking all this chart’s automakers and a few others in an earlier post.

Before studying the chart below, keep one other fact in mind. Through March 31st of 2011, the luxury auto brands for which Mexican sales data is known owned just 2.7% of the Mexican new vehicle market. Those same nine brands held 6.6% of the U.S. new vehicle market in the first quarter of 2011. 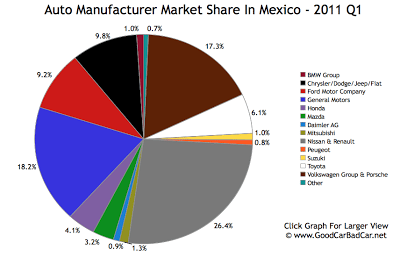