The tell-tale sign of dominance is market share. ‘Twas quite a day when GM’s market share was 41% in 1941 and then soared to 54% in 1954. As the Graph below manifests, General Motors market share in November 2010 in the company’s home market was better than that of any company, but below 20%.

Times change. Suck it up. With increased competition comes….. increased competition. On the luxury side, GM’s Cadillac brand must face off Mercedes-Benz and BMW – and their umpteen different models – as well as Lexus and its sterling solid reputation for quality. Lower-priced luxury vehicles from Acura, Volvo, and Saab joined high-priced mainstream cars from Honda and Toyota to make life miserable for Buick. Chevrolet’s been forced to fight for sales against an onslaught of product from all over the world. GMC’s truck portfolio can’t exactly fend off the rights of rival automakers who started playing the small and midsize SUV game first and with more skill.

Of course, GM sales were up 11.4% in November compared with November 2009. Sales of Chevrolet, Buick, GMC, and Cadillac were up 20.8%. Not surprisingly, a somewhat revitalized new vehicle market cooked up sales increases at other brands, too. Thus, new car market share in America looked like this in November 2010. 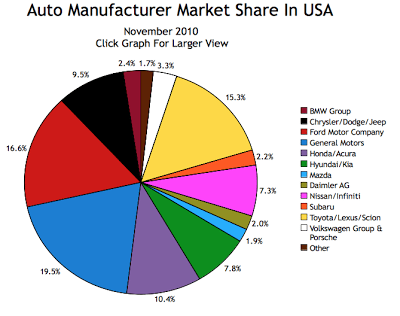