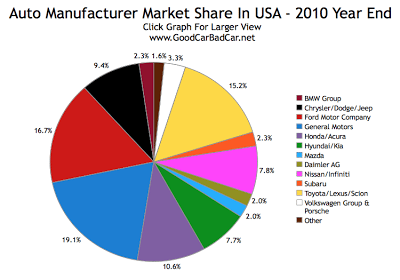 Twelve conglomerates controlled more than 98% of the new vehicle market in the United States. Approximately 45% of the market was Detroit-based: GM, Ford Motor Company, or Chrysler/Dodge/Jeep. Quick to point out that Subaru is now a mainstream manufacturer, The Good Car Guy acknowledges through this pie chart that Subaru only held 2.3% of the U.S. market in 2010, perhaps not as mainstream as the company’s 263,820 sales make it sound.

As for the Germans, Volkswagen’s vast empire only accounts for 3.3% of the U.S. new car market. BMW’s market share is a few ticks above 2%, Mercedes-Benz, Maybach, and smart are behind BMW’s control, a fate which is truly smart’s fault; and to Mini’s credit.