The Ford Motor Company and General Motors both lost market share in April. And which automaker managed to swoop in and post significant improvements? That’d be the Chrysler Group. Dodge sold 16,335 vehicles; Jeep added another 4280. Chrysler itself was up 40.4% to 2533 and there were also 889 Fiat 500 sales, more than there were in the States. Chrysler’s overall share of the market was 15% (up from 13.5% in March). That’s ahead of General Motors but behind Ford.

The Volkswagen trio also moved up significantly as Volkswagen had its best-ever Canadian sales month. Good news for Volkswagen Canada came from all sorts of sources. Leftover sales of the outdated City Golf and Jetta were down to 6. The 2011 Volkswagen Jetta found 3058 buyers while the Tiguan, Touareg, and Eos all posted gains. VeeDub Canada haz bin en de haus since 1952. 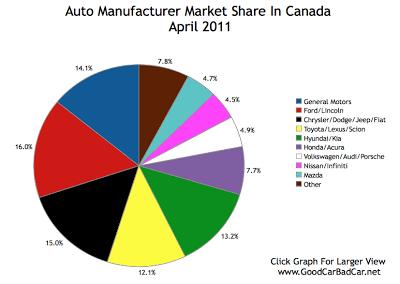