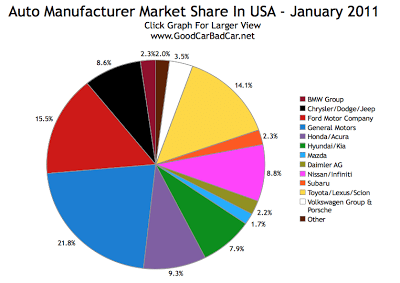 Home
Top Level Reports
Brand Marketshare
Nearly 22 out of every 100 new vehicles sold in the United States in January 2011 was a General Motors car, truck, SUV, or crossover. Overall, 45.9% of new vehicle sales were attributed to the Detroit Three. This is interesting given that January was a rather successful month for Chrysler Group, Ford Mo Co, and General Motors in America, but it’s the Canadian new vehicle market where the Detroit Three grabbed more than 50% of all sales.

Because of the strength of the luxury automobile market in America, luxury players like Mercedes-Benz and BMW are given place in this chart, a place they’re not given in the Canadian version. Once you glance at their slices of the pie you’ll understand why: together, BMW Group and Daimler AG owned 4.5% of the U.S. auto market in January. All together, German brands (plus Mini, Rolls-Royce, and Bentley) sold 8% of all new vehicles in the States last month. If that seems low to you, take a look back at 2010 when those same brands were 1.1 percentage points down from 8%.

Trucks and cars were a fairly even split in January. 50.39% of all vehicles sold were “light trucks”, a vast category that goes way beyond pickup trucks. 75.45% of all vehicles sold in America were built in North America Automotive News Data Center says, this despite the absence of Saturn, Hummer, Pontiac, and historically meaningful Mercury sales.