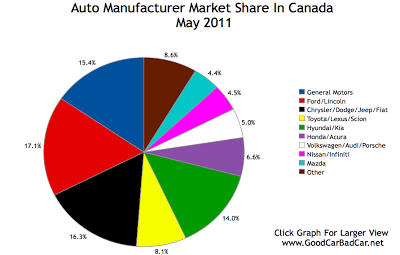 New Vehicle Market Share By Brand In Canada – May 2011

Home
Top Level Reports
Brand Marketshare
149,034 new vehicles were sold in Canada in May 2011. Only 46.6% of those sales were passenger cars. General Motors, Ford Motor Company, and the Chrysler Group (excluding Fiat) found 72,041 buyers, the majority of sales came about in dealerships which fly foreign logos. For a complete rundown on brand-by-brand volume, click here.

As for market share, GM, Ford, and Chrysler all owned more of it in May than in April. Toyota’s share of the market fell four percentage points to 8.1%. Hyundai/Kia improved, as did the Volkswagen Group, although only slightly. In fact, “other brands”, a group made up by Mercedes-Benz, BMW, Subaru, and Mitsubishi most notably, moved up nearly a full percentage point in May. Quite clearly, the losses at Toyota and Honda didn’t all go the way of the domestics. South of the border, General Motors, Ford, and Chrysler (excluding Fiat) held 49.6% of the market in May.

Ford, Canada’s favourite brand, has sold over 100,000 vehicles so far this year. Counting Lincoln, the Ford Motor Company nearly made its way to 107,000 sales. The Dearborn, Michigan-based company has increased its market share in Canada from 16% at this time last year to 16.6% through five months of 2011.

Not in the last eight years has there been a May as bad as May 2011 for automakers competing in Canada. New car sales last month were also significantly lower than April and March’s totals, as well.