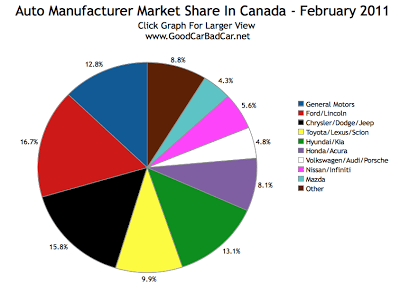 Home
Top Level Reports
Brand Marketshare
According to Desrosiers Automotive Reports, passenger car sales in Canada dropped 12.2% in January to 39,514. That equals just 41.2% of the overall new vehicle market. Light truck sales were up 2.3%, but the overall market still slid 4.2%. Market share domination was clearly Ford Motor Company’s, but Chrysler/Dodge/Jeep were very close behind. (And don’t forget those 9 Fiat 500 sales, not included in the black section of the Graph below.)

February 2011 was better than 2009’s February, better also than 2004’s February, but a far cry from 2008 when some 111,000 vehicles were sold in Canada. Growth compared with January was pronounced nonetheless, with more than 11,000 more new vehicles sold last month than in the first month of 2011. Despite apparent success at Ford Motor Company, Chrysler Canada, and General Motors Canada – as judged by the chunks of pie in the chart –  import nameplates out-sold the Detroit Three by nearly 9000 vehicles. 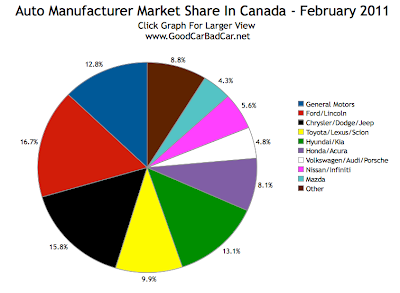