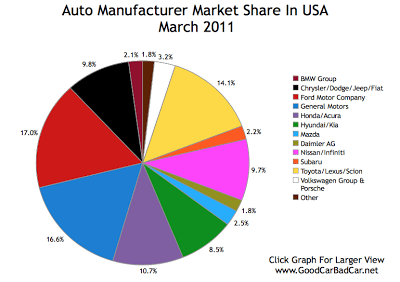 But it was Ford – with a 25% year-over-year F-Series bump; a 56% increase in Fiesta sales compared with February; and more than double the number of Explorers sold over the same period in 2010 – that really stole GM’s thunder. Are you surprised to hear about Alan Mulally’s $26,520,515 income from Ford Motor Company? I should think not. Still, GM sold 51,632 Cruzes, Malibus, and Impalas in March. Those three cars alone represented a greater percentage of the market than the Volkswagen Group, Mazda, Mercedes-Benz, Subaru, or BMW. Not bad for a handful of models from just one GM brand.

You might see it another way: 4.273% of all new vehicle sales in America in March were Ford F-Series pickups. For a look at every automaker’s monthly and year-to-date sales, have a click.