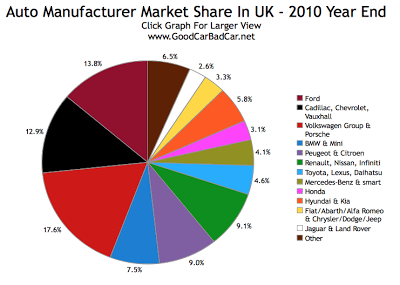 Home
Top Level Reports
Brand Marketshare
Here’s the bare bones analysis of the Graph below: Ford is big, but Volkswagen is bigger. By itself, as revealed in the previous post on UK Auto Sales in 2010, Ford sold more cars than any other brand in the United Kingdom in 2010. But Volkswagen didn’t fare badly in 2010 – sales were up 8.4% when Ford sales fell 11.4%. Plus, Volkswagen’s conglomeration includes the #2 luxury brand in the UK, Audi, as well as mainstream brands like Skoda and SEAT, in addition to Bentley and Porsche (sort of). Thus, Ford’s market share in Britain was 13.8%in 2010 while Volkswagen held 17.6% of the UK new vehicle market.

Ford’s market share in North America is 16.7% and 17.2% in the United States and Canada, respectively. In Canada, Jaguar and Land Rover’s market share is statistically obsolete, but in the UK, the two Indian-owned British automakers combine to hold a fairly impressive 2.6% of the market. That number looks even more impressive when compared with Fiat and its accompanying Italian and American brands. The yellow slice in the chart below makes up just 3.3% of the pie.