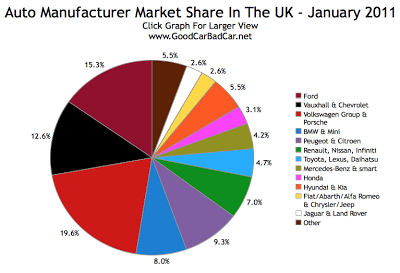 New Vehicle Market Share By Brand In The UK – January 2011

Home
Top Level Reports
Brand Marketshare
Ford was easily Great Britain’s most popular car brand in January – it’s lead over the nearest competitor was more than 4300 sales – but when Volkswagen is united with its underlings, the story changes slightly. Together with the Czech Republic’s Skoda and Spain’s Seat, as well as super-premium Bentley and the Audi luxury brand, Volkswagen held 19.6% of the UK auto market in the first month of 2011. That’s a gain of two percentage points from where the Volkswagen Group left off 2010. Ford is up on the 2010 Year End total, too.

In other words, the pie chart for UK auto market share you see below is markedly different from that which you’d normally see on GoodCarBadCar.net.