New Vehicle Market Share By Brand In The UK – March 2011

Ford was by far Britain’s most popular auto manufacturer in March, out-selling its nearest competitor – that’d be Vauxhall – by 11,251. Sales of Ford, Vauxhall, and third-ranked Volkswagen all declined compared with March 2010. Whereas the Canadian and U.S. brand rankings don’t see a luxury automaker appear until 13th and 14th, respectively, Audi was the UK’s fourth-ranked automaker in March. Nevertheless, the Volkswagen Auto Group’s market share dropped from 22.1% in February to 17.4%.

Meanwhile, though Blue Oval volume fell 14.9%, Ford market share grew 2.5 percentage points from February. General Motors lost four percentage points. 37.6% of all Ford UK sales in March were Fiestas; another 27.5% were made up by the second-best-selling Focus. 77.2% of all Vauxhall sales were Corsas, Astras, and Insignias. That leaves 9492 Agiras, Antaras, Merivas, and Zafiras, and perhaps some other things that end in aaah. 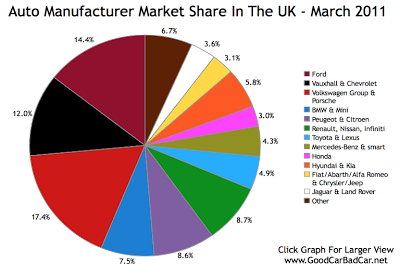