New Vehicle Market Share By Brand In The UK – May 2011

With a slight sales increase and tumbling sales in many rival showrooms, Ford was able to grow its UK auto market share from 13.4% in April to 14.3% in May 2011. The two best-selling cars in Britain were both Fords: the Fiesta and Focus. Ford sold 120,020 new vehicles in the United Kingdom through the first five months of this year, more than any other brand. 18% of those sales, or 21,581, came about in May.

Without its Lincoln luxury brand assisting – without assistance from any former PAG ally, either – Ford can’t compete with the Volkswagen Group’s overall strength. Volkswagen itself was up 13.9% in May on strong sales of the new Passat (Britain’s tenth-most-popular car). Alongside, Audi sold 9081 vehicles, up 2.3%. Skoda was up 21.4% to 4484. SEAT sales slid 6% to 2421. Porsche jumped 33.8% to 642. Bentley doubled its volume, improving to 110 sales, comparing quite favourably with Aston Martin’s 88 sales and Lotus’s 30.

Vauxhall outsold the VW brand on a 6% sales rise. Together with Chevrolet’s 807 sales, General Motors found 19,646 buyers in Great Britain last month. GM’s share of the market dropped a full percentage point from April, nevertheless. Volkswagen’s market share decline from April was worse than GM’s. BMW/Mini grew its share of the market, as did Peugeot/Citroen, Hyundai/Kia, and Jaguar/Land Rover. 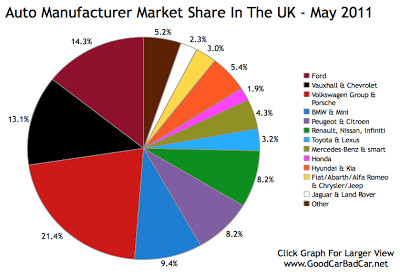