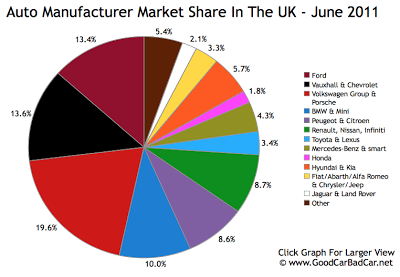 New Vehicle Market Share By Brand In The UK – June 2011

Home
Top Level Reports
Brand Marketshare
Ford, General Motors, and the Volkswagen Group sold more vehicles than any other auto manufacturing conglomerate in the UK in June 2011. The market share of each of those three groups, however, was lower in June than it was in May. Between the three, 47% of the British car market can be accounted for.

Strong BMW and Mini sales helped grow Munich’s share of the British car market from 9.4% in May to 10% in June. Peugeot and Citroen improved from 8.2% to 8.6%. Renault and its Nissan/Infiniti partners gained a half a percentage point between May and June. Despite significant year-over-year losses, Toyota/Lexus increased their market share, too. Jaguar and Land Rover fell back from May’s 2.3%. Honda slid ever so slightly.

As already made clear, it was the major brands with their major volumes that weren’t quite as major in June as they were a month earlier. This enabled rival automakers, in most cases, to grab a greater percentage of paying customers in early summer than they did in late spring.