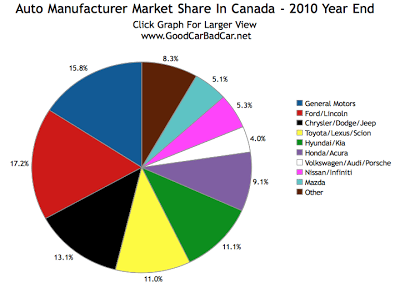 Home
Top Level Reports
Brand Marketshare
Hyundai and Kia combined to out-sell Toyota, Lexus, and Scion in Canada in 2010. Though the margin of victory was slight, just 417 sales, this is a startling development that comes in a year in which Toyota Canada sales fell 16.2%. In market share terms, Toyota and Hyundai were in a statistical dead heat in 2010, both grabbing about 11% of the Canadian market.

This shines a light on Ford Canada’s dominance. With more than 17% of the Canadian automotive market in Ford’s hands in 2010, the Blue Oval was responsible for 267,871 sales. This means Ford’s market share went up nearly two percentage points from 2009 while GM’s Canadian market share fell almost 1.5 percentage points.

And Ford sales in America in 2010 were greater than the whole Canadian automobile market in 2010, and by quite a margin, too.