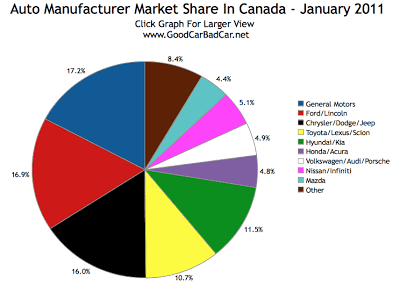 Home
Top Level Reports
Brand Marketshare
Since we’ve already surveyed the premises and analyzed the situation when laying out total sales by volume for automakers competing in Canada in January 2011, there’s not a lot of point in going in-depth here. Here’s what should be noted:

Ford Motor Company was 1.4 percentage points ahead of General Motors at the end of 2010. January is starting out on a different note, as GM is out in front and Chrysler Canada is trailing Ford… but not by much.

Honda Canada, Inc. was selling cars like mad at the end of 2010. This may mean the low sales by both Honda and Acura in January are as a result of exceedingly high volume at the end of 2010 – the buyers have already bought. Before you spell the end for Honda in Canada (Hyundai sold nearly twice as many vehicles in January 2011), remember the 2012 Honda Civic is right around the corner.