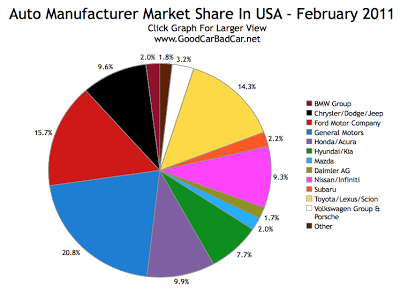 Home
Top Level Reports
Brand Marketshare
It’s possible, though unlikely, that some of these numbers could change a tiny teeny little bit in the next couple of days, but it actually appears as though automakers released their data early and GoodCarBadCar.net was on top of it.

With talk of Toyota’s resurgence firmly upon us, pay close attention to the market share slices held by General Motors and Ford Motor Company in the Graph below. Healthier though Toyota now seems (February 2010 wasn’t kind), Ford is ahead of Toyota by more than a percentage point. GM is another five points beyond Ford.

Bringing more pleasure to Toyota are the gains made compared with January 2011 when the trio of brands owned 14.1% of the U.S. new vehicle market. General Motors, Ford, and the VW Group have all slid back a bit; Chrysler has advanced with American Honda, Mazda and Nissan/Infiniti. 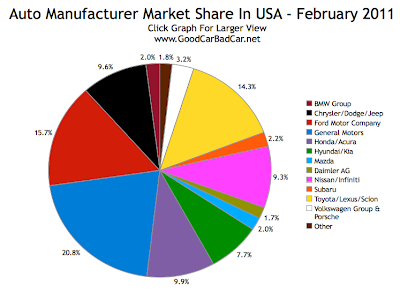