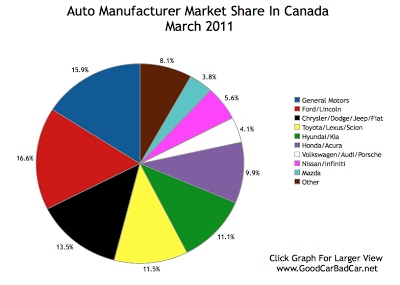 Home
Top Level Reports
Brand Marketshare
From the 12.8% doldrums of February 2011, General Motors improved its market share in Canada to 15.9% in March with lofty Cruze volume (4249 sold) and overall passenger car gains of 55%. This didn’t stop Ford Motor Company from maintaining its equilibrium, but Chrysler Canada, despite 417 Fiat 500 sales, saw its market share fall from 15.8% to 13.5% in March 2011.

Toyota sales were down compared with March 2010, but market share rose 1.6 percentage points from February. Hyundai and Kia both posted year-over-year gains, too, but Korea’s Canadian market share dropped two whole percentage points. Honda fought back from a tough February, as did Volkswagen, but Nissan, Mazda, and “the others” lost ground.

For a look at the brand-by-brand performance of every automaker competing in the Canadian marketplace, check out this afternoon’s earlier post.