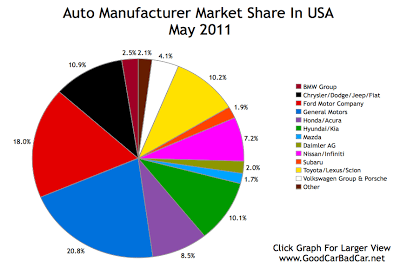 New Vehicle Market Share By Brand In America – May 2011

Home
Top Level Reports
Brand Marketshare
After talk of Hyundai/Kia surpassing Toyota Motor Corporation in overall sales in May – a result that would have been brought on by supply problems traced back to Japan’s massive earthquake/tsunami/nuclear disaster triad – it didn’t happen. South Korea’s Hyundai and Kia combined to sell 107,426 vehicles last month, up 34% on May 2010. Toyota, Lexus, and Scion sold 108,387 vehicles, down 33%, and quite forgivably so. It’s hard to sell vehicles when there aren’t any to sell. Hyundai/Kia’s market share grew from 9.4% in April to 10.1% in the chart below. Toyota fell from 13.8% to 10.2% during the same period.

Of course, when Honda, Mazda, Subaru, and Toyota suffer, others are going to be there to pick up the slack. Besides GM, Ford, and Chrysler, the Volkswagen Group’s slice increased from 3.6% in April to 4.1% in May. Two other German automakers, BMW and Mercedes-Benz, also owned a larger portion of the American automobile market by the end of May. A healthy Lexus could have an impact on those figures in the coming month, but in May, Lexus was down 44.6%, the worst decline among all automakers competing in the United States.