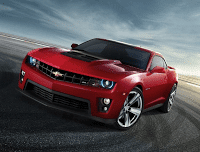 Discounting this current month of August 2011, the reborn fifth-generation Chevrolet Camaro has been on sale for 28 months. When we say “on sale” and “Camaro” in the same sentence, we actually mean “fighting against the Ford Mustang” for 28 months, right? And in the last couple years there’s been another cross-town rival with which to do battle, the Dodge Challenger.

Back in 2002 we thought this war had been waged and it was never to be fought again. The automotive climate wasn’t fit for a muscle car fight. Of course, Ford knew how to market the Mustang, and in 2005, Ford proved it knew how to style a Mustang, as well.

Even when Dodge and Chevrolet began showing concept versions of the next Challenger and Camaro in response to the praises showered upon Ford’s reinvigorated Mustang, it didn’t seem likely that sales of these if-or-when muscle cars would skyrocket.

Here we are in mid-2011, however, and the Camaro makes frequent appearances on GoodCarBadCar.net’s list of the Top 20 Best-Selling Cars In America. Sometimes the Mustang joins the Camaro in taunting conventional mainstream cars which are unable to crack such a list.

It’s true, the Challenger hasn’t been quite as big a hit, but don’t let yourself believe that Dodge wasted time and money developing its muscle car. Not at all. Just a few months ago, in March 2011, Dodge sold 3989 Challengers in America. That figure was greater than Porsche’s total U.S. volume in March, higher than what Audi managed with its A4, better than Hyundai’s total Genesis Coupe and sedan sales.

The Good Car Guy has compiled five charts and one table to help you understand the U.S. muscle car market since the Chevrolet Camaro went back on sale in April 2009. Here are a few pertinent facts before you delve into the details.

Check out the first chart below (it sort of does the work of a pie chart 28 times over) which shows total muscle car volume by month with portions afforded to the Camaro, Mustang, and Challenger. Then, after the jump, have a look at four more charts – some of which basically tell the same story in different ways – and the exhaustive volume-oriented table displaying the monthly U.S. volume reported by each of these three truly American cars. Go ahead and click any chart for a larger view. 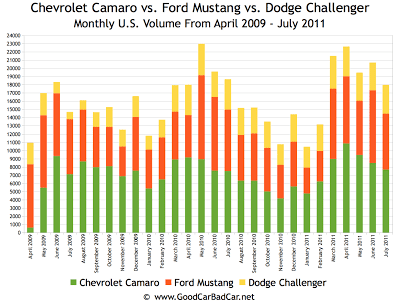