It’s rare, though certainly not unheard of, for GM’s two full-size pickup trucks to out-sell the all-time best-selling Ford F-Series. But it does happen…. periodically. May 2010 was one such month. Sales of the GMC Canyon and Chevrolet Colorado also combined to knock the Toyota Tacoma off this Graph of Canada’s Top 5 Best-Selling Trucks.

Stuck in the middle in May 2010 were Dodge’s Ram and the Ford Ranger, thousands of units behind the top dogs from GM and Ford’s full-size family. Ford is hugely reliant on sales of the F-Series, as shown in the charts on Sympatico Autos. That’s not to say General Motors and Dodge don’t absolutely require their pickups to be successful; because they most certainly do.
What Toyota has going for it, even when the Tacoma and Tundra fail to crack this Top 5, are extraordinary car sales. Toyota’s Corolla, Camry, Matrix, Venza, and Yaris are all very popular cars in Canada. That said, Ford car sales are rapidly gaining momentum. 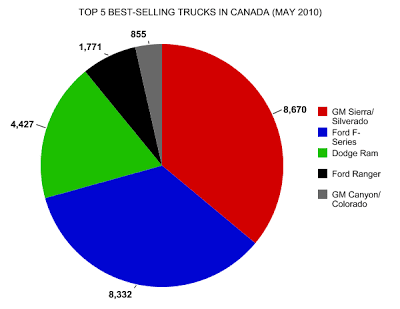