Having been on sale for since June, sales of the exciting 2011 Buick Regal are lackluster, at best. Availability might be low, yes, but one way or another that’s GM’s fault; not the fault of Canadian clientele. Oh, and another curious General Motors decision, to be altered later on, has the 2011 Buick Regal priced at $31,990. The larger, more spacious, and generally more powerful Buick LaCrosse is currently available for $29,713 with price adjustments. Lucerne sales, as you’ll see in the Large Car Sales chart for July 2010, reached 400 in Canada last month.

By the way, if Regal sales seem low to you, do take into account the fact that Regal sales will rise. Mitsubishi Galant sales, on the other hand, were at 14 in June, 13 in May, 9 in April, and 93 in March. Recovery does not appear to be inevitable.
Not long ago, a specific Cadillac STS model was in The Bad 8 v2.0. Only three Canadians seated themselves in an STS last month. That’s bad, too. To be out-sold by the Acura RL must be a dreadful thing. The Hyundai Genesis, seen only as a sedan in the Graph below, doesn’t really belong in any category. Built as a large midsizer, priced like an entry-luxury car, badged like a mainstream large car, the Genesis makes it hard to adequately analyze its sales figures. Nevertheless, fending off the Lincoln MKS is a symbol that the Genesis is at least moderately successful. 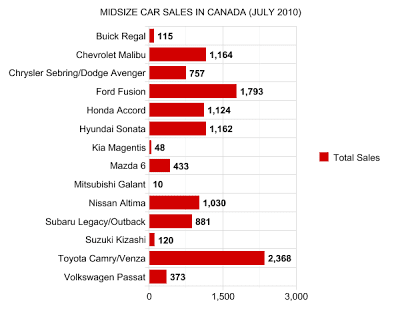 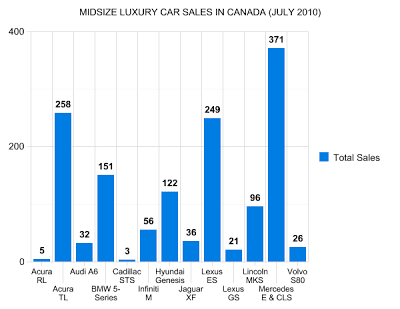