Canada’s May 2010 auto sales picture comes to a close with this picture, about six weeks after May 2010 came to a close. The most popular luxury automaker in Canada in May 2010 was Mercedes-Benz. Ranked 13th behind Kia, Volkswagen, and Jeep, Mercedes-Benz posted huge C-Class sales and a dominant midsize luxury victory with the E-Class, as you’ll see below. Mercedes-Benz Canada continues to link CL-Class sales with the S-Class, somewhat rightfully, but with no other big sedan-based coupe in this segment it’s hard to judge the strength of S-Class sales when compared with the 7-Series and Lexus LS.

BMW, ranked 15th overall in May, began to see its 5-Series sedan catch on. The new XJ had yet to see the light of Canadian day at Jaguar dealerships. If the U.S. sales story is anything to go by, (which it may not be) the XJ family could be primed for a sales resurgence in Canada over the course of the summer.

And will the Audi A8 ever grab attention in the Canadian market? Sales of the new A8 have begun – numbers should improve in the June 2010 rundown, but it’s doubtful the A8 can muster Sales Stats anywhere close to what you see from Benz and BMW. 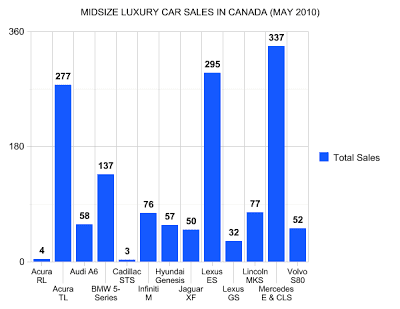 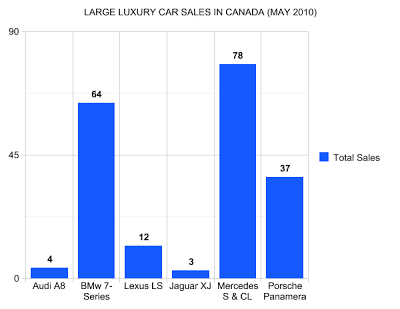