So much for all the talk about Toyota’s demise. Not only was the brand as a whole March’s best-selling automotive brand in the United States, its most famous product was the best-selling car in America in March, too. The Toyota Camry, frequently mocked on GoodCarBadCar.net for its bland nature and annoying ubiquity, crushed the competition. Sales of the Toyota Camry in March doubled up the Camry’s Sales Stats total from February.

Better yet for the Japanese giant, the Toyota Corolla was the United States second best-selling car in March, some 7,000 units ahead of its main competitor, the Honda Civic. Combining sales of the two best-selling GM cars, the Chevrolet Malibu and Chevrolet Impala, still isn’t enough to topple the almighty Toyota Camry, a car which has had its share of horrific press coverage in 2010. Y’almost get the feeling that Toyota Camrys have a bit of swagger now. The Top 10 Best-Selling Cars In America for March of 2010 are in the Graph below. 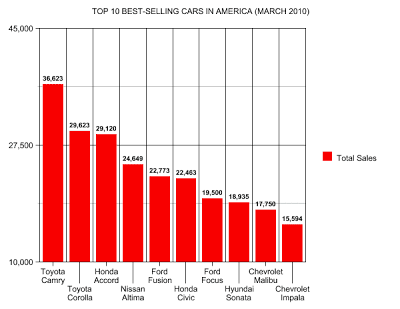