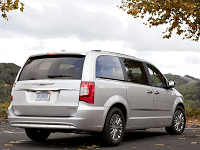 What hasn’t yet been said about the Dodge Grand Caravan’s dominance in the minivan segment in Canada? In June 2011, 57% of all minivans sold in Canada were Grand Caravans.

Exclude the small Mazda 5 and Kia Rondo from the equation and throw the Chrysler Town & Country’s 652 sales into Dodge’s mix. In that case, Dodge/Chrysler’s market share in the large minivan category climbs to 74%. Sales of the Toyota Sienna were up 6.6%. The Honda Odyssey was up 29%. But Honda, Toyota, Kia, Nissan, and Volkswagen only nabbed one out of every four buyers who wanted a honkin’ minivan in June.

The truck story in Canada was fairly well covered when GoodCarBadCar.net published a list of the Top 10 Best-Selling Trucks on the 9th of this month. Ford F-Series sales fell 10%. GM’s Sierra/Silverado twins came within a whisker of topping the F-Series…. at least when combined. Dodge Ram sales jumped 28.5%.
What you didn’t see in the table from earlier this month were trucks like the Cadillac Escalade EXT (up one unit), Chevrolet Colorado (down 49%), Dodge Dakota (up 26%), Honda Ridgeline (down 56%), and Nissan Titan (down 20%). The four most popular trucks in Canada – Detroit’s four core products – owned 86% of Canada’s truck market in June. 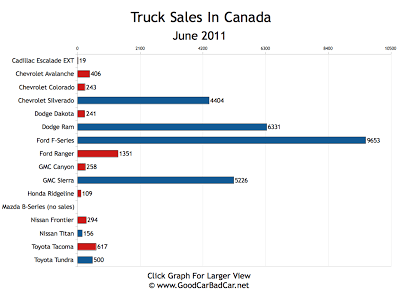