There’s no denying Chrysler and Dodge’s hold on the Canadian minivan market is based partially on price. You get the full-size minivan type, not the small sort like the Kia Rondo or Mazda 5 but the price is more Kia/Mazda-like than Honda/Toyota like. The new 2011 Honda Odyssey is priced from $29,990. The 2010 Dodge Grand Caravan starts at $20,945 and tops out (before options) at $27,990 for the SXT Plus.

Even so, the 2011 Dodge Grand Caravan and 2011 Chrysler Town & Country will feature a 283-bhp 3.6L V6, an improved interior, and slightly rejigged styling. Adding greater appeal to a minivan that’s already wildly successful will pay off. To what extent? 64% of all minivans sold in Canada in October 2010 were either Dodges or Chryslers. Chrysler only sold 452 of’em, but still. The duo is unbeatable. 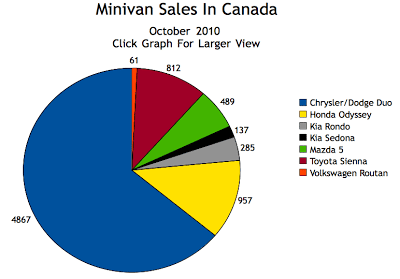