It’s not inappropriate to liken the Dodge Grand Caravan’s dominance in the Canadian minivan market to Michael Schumacher’s 2002 Formula 1 season. I know what you’re thinking: minivans and F1, whaaa? But just give it a few moments of thought and you’ll start seeing the parallels.

In 2002, Scuderia Ferrari’s Schumacher finished on the podium in every race, failing to finish in first or second spot only once. With six races remaining, Michael Schumacher had already secured the World Drivers Championship. Along with teammate Rubens Barichello, Schumacher’s Ferrari F1 team totalled more points than all other team entrants combined. It was… devestating, both to opponents and to fans who wanted to see meaningful races at the end of the season.

In every single month of 2010, the Dodge Grand Caravan was Canada’s best-selling minivan. Not once did it fail to ascend to the top step of the podium. With nine months remaining, Dodge had sold 12,601 Grand Caravans, a figure higher than that which any other minivan would attain by the end of the year. Like Michael Schumacher at Ferrari, the Grand Caravan had a partner, the Chrysler Town & Country. When the Town & Country’s sales are added in to the Grand Caravan’s mix, Chrysler Canada held 65% of the minivan market in December 2010; by year end that figure plunked down at 63%. You could restrict the overall market size from Mazda 5 and Kia Rondo participation, an act which would see Chrysler Canada’s minivan market share rise to 74%.

Yes, every time Honda or Toyota or Mazda or Kia or Volkswagen sold a minivan – the Volkswagen being a Canadian-built Chrysler product in all but badges, by the way – Chrysler Canada sold 1.7 minivans. Again, I do feel bad for the folks who drove away with only 7/10ths of a van.

Chrysler Canada owned 13.1% of the Canadian new vehicle market in 2010. 29% of the company’s sales were minivans. Now, Chrysler has improved these vans for the 2011 model year in significant ways; under the hood and inside the van, too. So could the $22,995 2011 Dodge Grand Caravan grow its Canadian minivan market share in the coming months? In the face of direct opposition from the new $29,990 2011 Honda Odyssey and high-end competition from the Dodge family’s own all-new 2011 Dodge Durango, a $37,995 rugged SUV, can the 2011 Dodge Grand Caravan still sell like crazy to families and fleets? Uh…. yeah. And for one more parallel, Schumacher was winning all those races for a race team owned by a manufacturer which was run by Fiat. But at the time Schumacher was winning all those races, the Dodge Grand Caravan was being built by a company which was run by Daimler, i.e. Mercedes-Benz. Now Schumacher drives for Mercedes-Benz and Chrysler is run by Fiat. 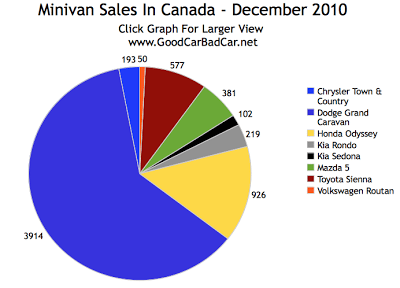 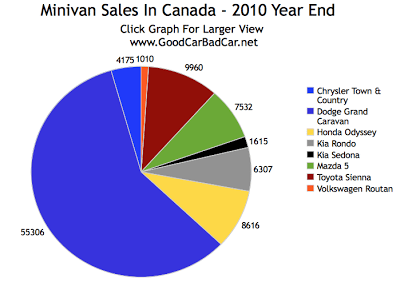