In the more price-sensitive Canadian market, the 2010 Chevrolet Camaro doesn’t appear likely to challenge the on-sale-now 2011 Ford Mustang for muscle car sales supremacy. Unlike in the United States, where the Camaro seems to have locked up the title for 2010’s best-selling muscle car/pony car with an apparently insurmountable lead, Canadian buyers spread their love to the less-expensive Ford. The 2011 Ford Mustang has a base price of $22,999. The 2011 Chevrolet Camaro has a base price of $26,995. The 2010 Dodge Challenger, by the way, currently starts at $25,995.

It happens to be The Good Car Guy’s opinion that, in this segment at least, the least-expensive model is also the most appealing. The same can’t be necessarily be said of maximinivans. The Dodge Grand Caravan is…. alright. What you really want, however, is a 2011 Toyota Sienna, the Swagger Wagon. In Canada, the Sienna and just-coming-on-stream 2011 Honda Odyssey will be fighting for second place for the foreseeable future. Grand Caravan sales, even without the Chrysler Town & Country, were still 4232 units strong in September. As it stood at the end of September 2010, the Toyota Sienna was leading the outgoing Honda Odyssey model by about 1800 sales.

In the mostly-separate Mazda 5 vs Kia Rondo sales battle, the Mazda (which also happens to be ahead of the Honda Odyssey year-to-date) leads the Rondo by over 500 sales through the end of September. 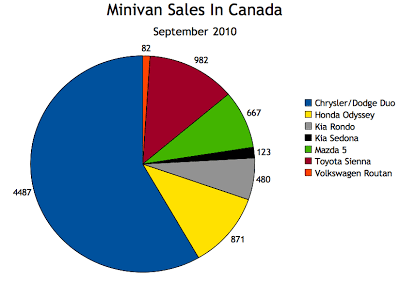 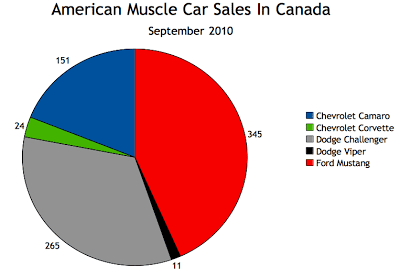