Apart from strong performances by American automobile manufacturers, what do muscle cars and minivans have in common?

Basically nothing, which is why The Good Car Guy throws their Graphs together each month. For contrast’s sake. If you think the Chevrolet Camaro (muscle car victor in August after a lull) and 2011 Ford Mustang are protected from embarrassment by being joined together with low-volume American machinery like the Corvette and Viper, think again. Later on, you’ll see a Graph in which the Nissan 370Z and Volkswagen GTI and Mitsubishi Eclipse all display their own low-volume status. In 2010, the Ford Mustang and Chevrolet Camaro are big time earners for Ford Motor Company and General Motors.
As far as minivans go, the 2011 Honda Odyssey could shake things up a bit in the coming months, but for now, there’s no exception to the general rule that says, “Chrysler first; everyone else follow the leader”. That said, sales of the current 2010 Honda Odyssey, Toyota’s Swagger Wagon Sienna, Kia Sedona, and the Chryler Town & Country are all up compared with August 2009. Mazda 5 sales fell 40% in August. Kia has cancelled the Rondo and sales in August (94) were so low the Rondo didn’t earn a spot in the Minivan Sales Graph. North of the border, Canadians eat the Rondo up. 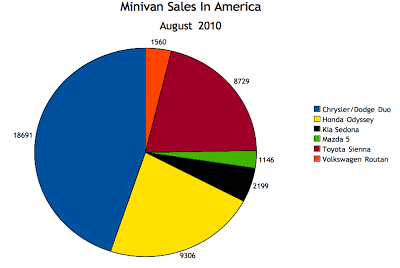 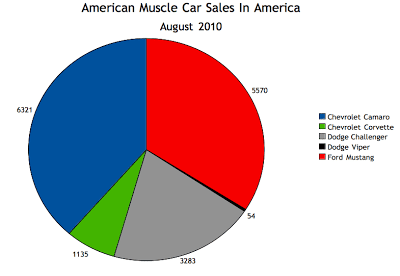