Chew on these facts. First, of the 27,869 new pickup trucks acquired in Canada in March 2011, 92.1% were sold by Dodge, Ford, and General Motors. Add to that the Japanese-badged trucks that are built right here in North America. 18.1% of all new vehicle sales in Canada last month were trucks. Compare that with the truck segment’s 12.6% market share in the United States for a better idea of just how strong truck sales in Canada have been of late.

There were disappearing acts, however. Suzuki sold 6 Equators in Canada in March 2010 but none so far this year. It’s still shown as the $34,995 2010 Suzuki Equator on Suzuki’s Canadian website. Dodge Dakota sales, meanwhile, fell 10% in March and are off 13.2% year-to-date. Toyota truck sales dropped 16.8%. Honda Ridgeline sales were almost cut in half. And as you’d expect given their death notices, sales of the Ford Ranger and Mazda B-Series dropped 27.5% and 24%, respectively.

Yet sales of the Ford F-Series, Dodge Ram, Chevrolet Silverado, and GMC Sierra – the major players – all increased thanks to huge incentives that helped some consumers quit their fretting over high fuel costs. Of that quartet, the Silverado’s gain was greatest as Chevrolet posted a 28% increase in sales of Canada’s fourth-best-selling truck.

The term, “minivan sales in Canada”, has always been very nearly synonymous with, “Dodge Grand Caravan sales in Canada.” 61% of the Graph below is taken up by a big blue slice of DGC, not to mention the 234-sale slice afforded to its twin, the Chrysler Town & Country . Toyota Sienna sales jumped 72.7% in March, Mazda 5 sales dropped 8.8%, and Honda Odyssey sales were up 51.1%. Nissan, just getting the Quest off the ground, saw sales of 2011 model increase tenfold over what was a basically un-marketed, defunct Quest in March 2010. 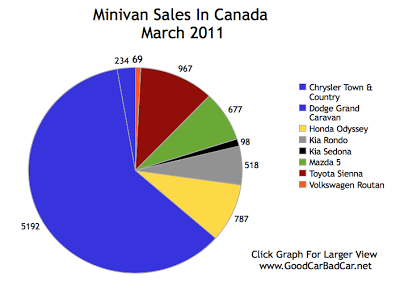 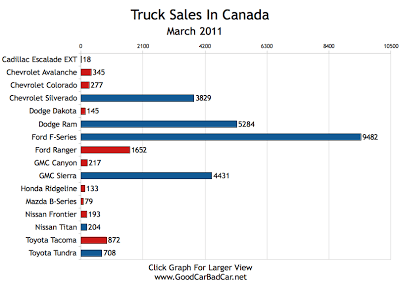