With a 13.6% gain the Dodge Grand Caravan greatly out-performed the overall Canadian new vehicle market in February 2011 which fell from 100,352 sales in February 2010 to 96,112 this year. Chrysler’s Town & Country lost five sales, the Volkswagen Routan was down significantly, and the Kia Rondo fell 10.8%. At the same time, Honda Odyssey sales rose 61.7%, Mazda 5 sales increased by 82.7%, Kia Sedona sales nearly doubled, and the Sienna bucked Toyota trends by posting a 238% jump. Did Swagger Wagon advertising work? One would imagine.

We’ve already covered Canada’s 5 Best-Selling Trucks, so now’s a good time to look at the slow sellers. Honda Ridgeline sales fell from 175 in February of 2010 to just 77 last month. The Nissan Titan, though inflicting no damage to Ford’s F-Series, did post a 95.4% increase in February 2011. Frontier sales also increased for Nissan, up 54.3%. Combined, the two General Motors small pickup trucks posted a 25.3% decrease in volume from February 2010.

Surprised by the Dodge Ram’s gains? Up 41.5% in February, the Ram trailed the Ford F-Series by “only” 1156 units in February. The Dodge Ram owned 25.1% of Canada’s pickup truck market in February. Ram market share in the United States in February was just 14.2%. 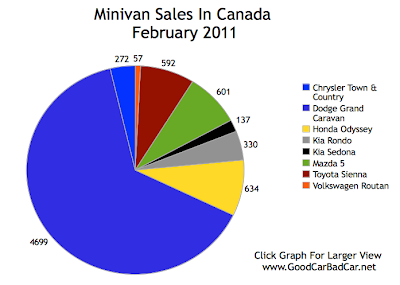 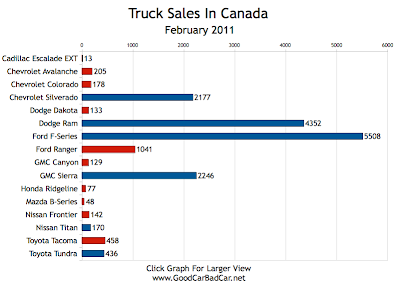