For all the talk of the minivan’s death, it’s interesting to see a minivan sales chart posted here alongside another chart for truck sales. By the standards of the Ford F-Series, there are really only a handful of truck models that sell in meaningful volumes. Together, yes, the truck market was worth 113,378 sales in January 2011; minivan sales totalled barely more than 31,000.

With the Ford Ranger’s soon-coming death and the full-fledged onslaught of the excellent Good 12-winning 2011 Ford F-150, the truck buyers will be even more in favour of supporting best-selling trucks in the coming months. Likewise, the Kia Rondo has already been restricted for U.S. consumption and the minivan market’s best sellers from Chrysler and Dodge are substantially revitalized for 2011. It’s unlikely that the all-new 2011 Nissan Quest will be a huge thorn in the top sellers’ sides. Successful though the new 2011 Honda Odyssey may seem (sales were up 44.4% in January) in spite of its awful door cut, Chrysler still held close to half the market. 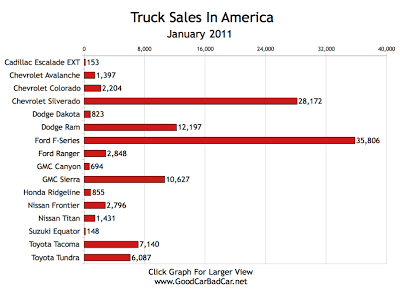 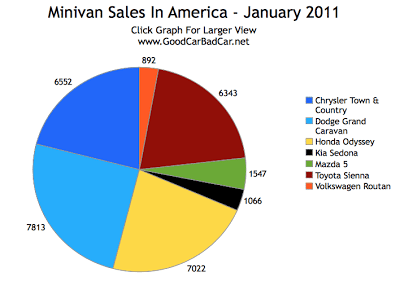