Mini sales were up 9.6% thanks to near-brand-wide increases and the addition of the Paceman, but the BMW brand’s contributions grew much faster. 3-Series sales, for example, were up 62.6% as it outsold the whole Mini brand by 4386 units. In June 2012, the 3-Series only outsold the Mini brand by 745 units. 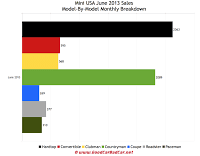 The only Mini to report a year-over-year decline was the brand’s most popular model, the conventional, original Cooper Hardtop. Year-to-date, sales of the Hardtop, Convertible, Clubman, and Coupe have fallen. Countryman volume is up by 1303 units through six months, however, and the Roadster and Paceman have contributed an extra 1340 sales. This explains Mini’s 0.9% year-over-year increase through the first half of 2013. Only in December 2012 has Mini USA ever sold more Countrymans than it did in June 2013.