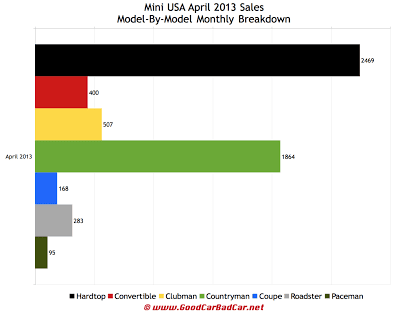 Two of the seven available Minis accounted for three quarters of Mini USA volume in April 2013. Sales of the conventional Mini Cooper, which is known as the Hardtop, fell 6% in April and are down 6% through the first four months of 2013. Sales of the Mini Countryman shot up 22% and are up 18% this year.

April marked the Countryman’s 2013 monthly peak, but in its second month on sale, the Countryman’s two-door brother fell back to just 95 units. Availability is presumably a key factor in the Paceman’s slow start.

And the dreadfully ugly Mini Coupe continued its slide. If it were to ever have a second generation, which it probably won’t, the Coupe would need to not look stupid. 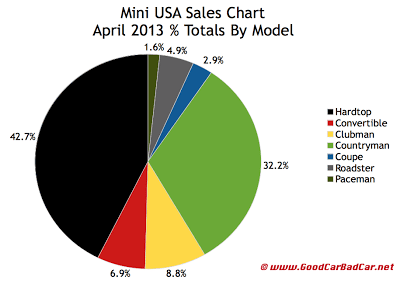 Click either of the accompanying charts for a larger view. Keep in mind the totals achieved by the Fiat 500 and Volkswagen Beetle: 3899 in April and 13,511 year-to-date for the Fiat; 3679 and 13,689 for the Beetle, including 1699 Beetle Convertible sales in April and 4389 so far this year. Fiat said Abarth sales rose 22% in April, but did not elaborate.