Mini introduced a new Cooper Hardtop in November and, of course, it’s quite a bit larger, as well. This photo is the best evidence of that. Almost four inches longer than its predecessor, almost two inches wider, and a speck taller, too, the core Mini Cooper has all but ballooned compared with the Mini that BMW introduced a little more than a decade ago. 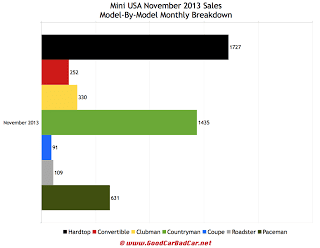 As we approach the current Hardtop’s replacement phase, sales of the outgoing car have been tumbling. As have sales of the Convertible, Clubman, and Coupe that use the Hardtop’s foundation. As a result, even with the addition of the Paceman, Mini’s U.S. sales are up just 0.4% this year, an addition of just 243 sales through eleven months. Mini’s November sales slid 13%, or 673 units.

Other then the Paceman, which wasn’t on sale at this time last year, every single vehicle line sold less often last month than during the equivalent period one year earlier.