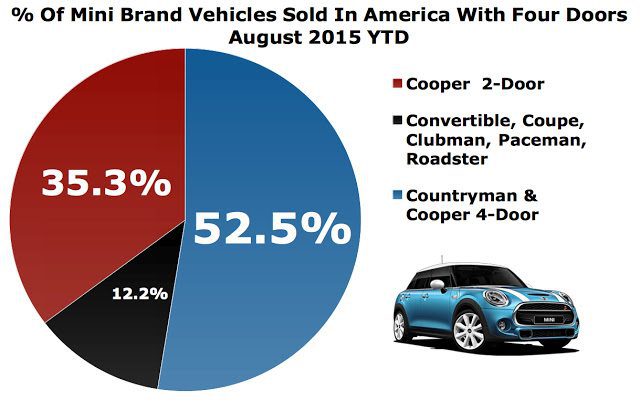 Through the first eight months of 2015, the majority of U.S. sales generated by BMW’s Mini brand were developed by four-door models.

The so-called Mini Cooper Hardtop 4-Door, the stretched version of Mini’s third-generation hatchback, was released as an all-new model at the beginning of this year. 10,425 Mini Cooper 4-Doors have been sold so far. In many other markets, it’s referred to as the 5-Door, and it’s not to be confused with the upcoming Clubman.

In the prior generation, the Clubman was a stretched version of the conventional Mini but did not have four traditional passenger doors. The Clubman version of BMW’s third Mini Cooper is essentially a Mini wagon. The 2016 Clubman goes on sale soon, priced from $24,950.

That pace could improve if the Clubman is warmly welcomed, but a hot-selling Clubman may intrude into the 4-Door and Countryman’s slice of the pie.

In 2008, Mini USA sold more than 54,000 vehicles when the brand’s lineup was small: no Countryman, Paceman, Coupe, Roadster, or any 4-door product whatsoever. Mini is generating added sales now, compared with that period, but to do so, the brand was forced to introduce a bevy of new products.

During the first eight months of 2015, 43.5% of the Minis sold in America were four-door models, all in the form of the taller Countryman.