Mini USA Sales In May 2011 – The Countryman Is Necessary

BMW, America’s most popular luxury auto brand in May, has been selling Mini brand cars in the United States since the 2002 model year. Initially, Mini sales were much higher than BMW forecast; the German executives hadn’t realized just how easily a retro British hatchback could capture attention in the U.S.A. Mini sales were then boosted by the introduction of the less practical Convertible and more practical Clubman in later years.

Then, just a few months ago, Mini began offering the Countryman for sale, a few days before The Good Car Guy drove it. It’s hard to call the Countryman an SUV, not just because that term has increasingly been replaced by relatively meaningless crossover designation, or simply CUV. Calling the Countryman a crossover or CUV is a stretch, too. But it is a 4-door Mini with overtly rugged styling and a bigger cabin. Whatever you call it, it’s now hugely important to BMW’s Mini brand.

That fact becomes more obvious when studying the first chart below. In May, the Countryman accounted for about three out of every ten Mini sales. That’s more than the Mini Convertible and Mini Clubman combined. The second chart tells the story of the first five months of 2011 wherein Countryman sales started with a gradual ascent as supply came on stream. By May 31st, 27.3% of all new Minis in the USA were Countrymen/Countrymans.

Don’t go confusing the Countryman with the Honda CR-V or even the Volkswagen Tiguan. VW, for instance, sold nearly twice as many Tiguans as Mini sold Countrymen/Countrymans in May. And for every Mini Countryman sold, Honda sold 9.5 CR-Vs last month, and it was a bad month for the CR-V.

Perhaps more stressful to BMW’s Mini executives is the declining interest in the Convertible and Clubman. In 2011, sales of the Mini droptop are down 26.2% (May was even worse at -40.5%) and the stretched Mini is off 19.4% (again, May was worse at 27.5%). Fortunately, the Countryman is here and sales of the regular Cooper and Cooper S Hardtop hatch are up 25.6% through five months. Also, the 2012 Mini Coupe isn’t far off. That’ll further assist Mini in its quest for niche market domination over Scion and Fiat. 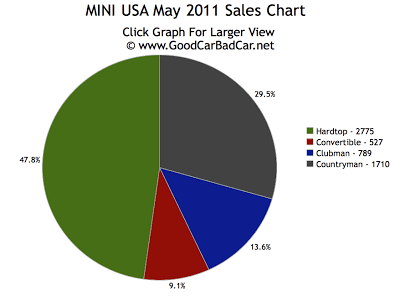 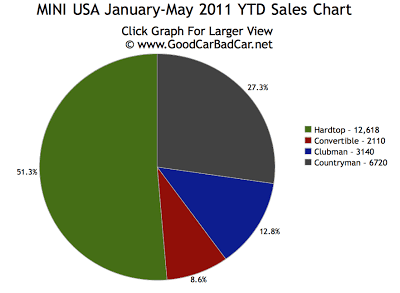 Mini is now a vital part of the BMW family. In terms of overall volume, the Mini brand did more for BMW USA in May than any other product line save for the 3-Series. More than two in every ten BMW USA sales in 2011 have been Minis of one variety or another, as you’ll see in the chart below. BMW sold 5604 SAVs in May, admittedly more expensive vehicles than what you see on the Mini side of the showroom. But the Mini family topped the BMW SAV family, not an easy task, regardless of their respective price points.
The BMW Group’s May 2011 market share in the United States was 2.5%. By itself, Mini’s market share last month was 0.55%, some way better than the 0.37% Mini owned in Canada in May. However, it’s worth mentioning that the Mini Countryman has an in-showroom rival in Canada that’s not present in neighbouring America: the X1. Mini found 178 Canadian Countryman buyers last month; BMW sold 298 X1s. Also, sales of the rest of Mini’s fleet were down 25.3% in Canada, but the brand was up 10.2% because of the Countryman’s introduction. 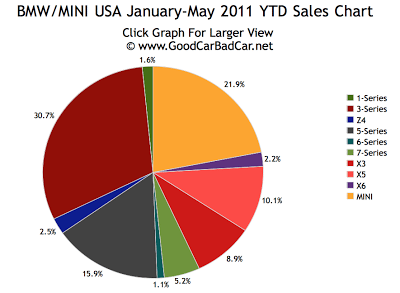