Continuing the theme put forth in the Graphs of Small SUV Sales and Small Luxury SUV Sales, have a glance at those worst-off midsize SUVs. Now scroll further and discover the downtrodden midsize luxury SUVs. A shame, isn’t it? No, really, I’m not being sarcastic. It’s a shame that struggling companies like Mitsubishi pour untold thousands of dollars into producing a new vehicle just to see consumers flock to other machines, ignoring yours as though it’s the modern incarnation of The Plague.

The Mitsubishi Endeavor, or Endeavour as it perhaps should be in Canada, has racked up only 226 sales so far this year in the land of Celine Dion and Sidney Crosby. That’s down from a pitifully low 449 at this time last year. Through seven months, the Mitsubishi Endeavor has less than half the sales Honda’s Pilot accrued in July alone. And the Pilot isn’t even close to being Canada’s favourite midsize SUV – that’d be the Ford Edge. Ford sells 41 Edges for every one Mitsubishi Endeavor. By the way, the 2010 Mitsubishi Endeavor has a base MSRP of $36,998. The 2011 Ford Edge starts at $27,999. The 2011 Honda Pilot has a base price of $34,820.
Volkswagen’s in a bit of a different boat. Boarding a luxury ship with mainstream swimming trunks is a highly dangerous activity, but the Volkswagen Touareg price bracket (starting at $45,300 in Canada) is certainly too rich for the Pilot, Edge, and Endeavor. Volkswagen is thus compelled to compete with the $46,900 Lexus RX350, $43,085 Lincoln MKX, and $51,990 Acura MDX. VeeDub can’t do it. The Touareg, even with rejigged styling and updated powertrains and a fairly beautiful interior, isn’t sought after in this segment. You can only blame so much on the Touareg’s age, however. Even last year at this time, July 2010 sales had reached just 68. July 2008’s Volkswagen Touareg sales total was just 45; July 2007’s 31.
Details on the sales of every midsize SUV and midsize luxury SUV are below. 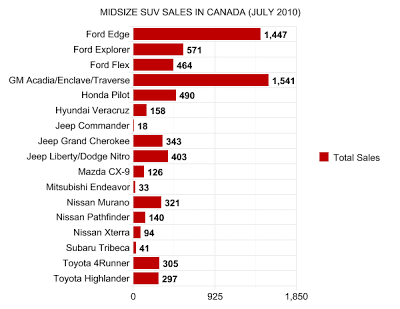 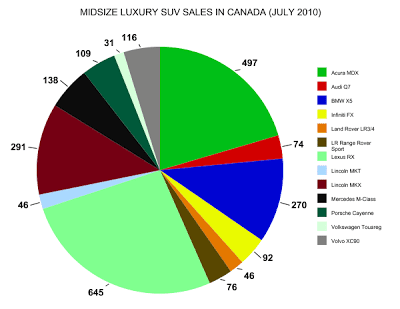