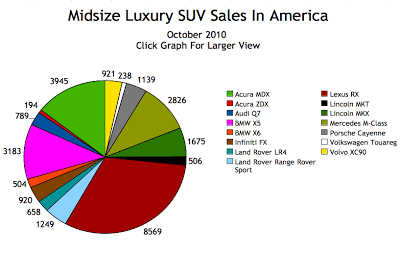 Home
All Vehicle Rankings
SUV Sales
Midsize SUV Sales
While the Lexus RX350 continues as the world’s dominant luxury utility vehicle, others are struggling to catch on. Consider the Lincoln MKT and Acura ZDX, for example. Armed with totally different strategies, the Lincoln hasn’t caught on as a luxurious family hauler. The Acura, meanwhile, only manages to move people to tears. Others are currently selling poorly, too, but the new 2011 Volkswagen Touareg should improve VW’s state of affairs and Land Rover’s situation appears to be on the mend.

In less expensive American automotive showrooms, General Motors and Ford Motor Company play a greater role. Individually, the Chevrolet Traverse and 2011 Ford Edge are forces to be reckoned with. Mated to their brands’ portfolios – the Traverse, Enclave, and Acadia and the Edge, Flex, and 2011 Ford Explorer – ruled the roost in October 2010 SUV sales. 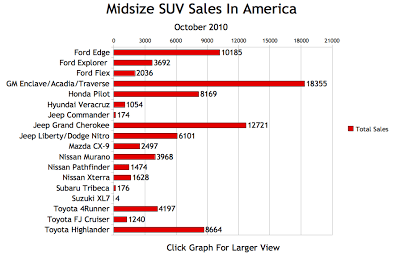