It’s not just that the Ford Edge could beat the total efforts of three large, impressive, successful GM utility vehicles; nor is it the fact that Toyota and Honda and Nissan were beaten, too. No, what’s most consequential is the turn Ford took, particularly once the 2011 Edge came on stream: sales were up 41.3% 2010. Also, Ford didn’t barely beat General Motors, and the victory over Japanese mainstays like the Highlander, Pilot, and Murano was a good ol’ fashioned whipping.

Rather than focus on the good news at Ford, why not have a look at the unsuccessful entrants in the midsize SUV category? It wasn’t as though Subaru’s Tribeca was ever chugging along nicely, but the latest Outback’s success didn’t spell well for Subaru’s biggest vehicle. Tribeca sales fell 8.8% in 2010, a year in which the market grew 6.6%. For every Tribeca sold in Canada in 2010, Subaru sold 12 Outbacks and Ford sold nearly 32 Edges. How ’bout the Mitsubishi Endeavor? One would’ve thought sales of the Endeavor were about as low as could be in 2009. Only 545 were sold in Canada last year, after all. Yet sales dipped 30% even as Mitsubishi maintained a mostly level overall sales total.

Big SUVs present a different story from 2010. Of the eight listed in the Graph below, only one – the Kia Borrego – failed to improve on 2009’s sales levels. Toyota Sequoia sales were up 14%. Nissan Armada sales were up 111%. Ford Expedition sales rose 5%. GM’s foursome was up 50.5%. Even so, jumbo SUVs remain a niche market in Canada. Not a single one of the eight listed posted a figure which would find them among the ten best-selling midsize SUVs. 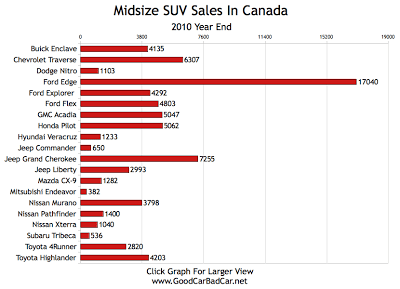 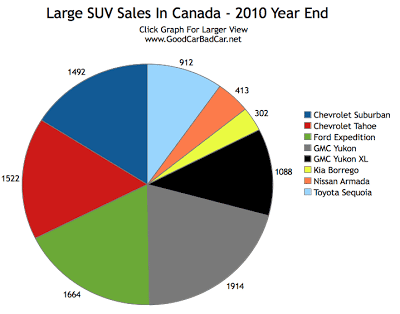