67% of the large sport-utility vehicle market was owned by General Motors in Canada last month. November 30th of 2010 marked the end of a month in which full-size Chevrolet SUV sales went up 11.7%; a month in which GMC Yukon XL sales rose 74.8%; and GMC Yukon sales jumped 144%. It wasn’t all bad in the segment below where U.S. domestic automakers grabbed seven out of every ten new sales. The 2011 Ford Edge led the way on sales rising 42.3%.

But what’s up witth the Mazda CX-9? It looks good and drives nicely, but Canadians reject it like it’s a Saturday night CBC broadcast of Aussie Rules Football in January. And this is with a 73.3% sales increase over November 2009. CX-9 sales are up 19.2% this year and yet Ford had more Edge sales in November than Mazda’s had CX-9 sales all year. Take one for a drive, people.

The Sequoia and Highlander were two rare Toyota exceptions in November. Both SUVs posted increased year-over-year sales: Sequioa was up more than 29%; Highlander was up 18.7%. Nissan Armada sales are up 118% so far this year, not an unusual accomplishment for a Nissan truck or SUV this year. Only the Murano is off last year’s pace, and only then by 2%. Titan, Frontier, Xterra, Pathfinder, and Rogue sales are all better in 2010 than in 2009. It goes without saying that the Juke’s sales figures are much, much better than they were last year. 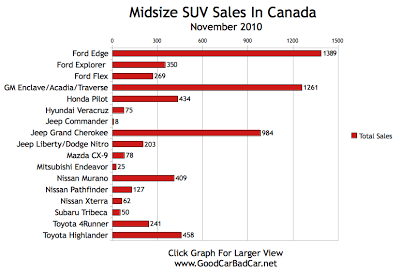 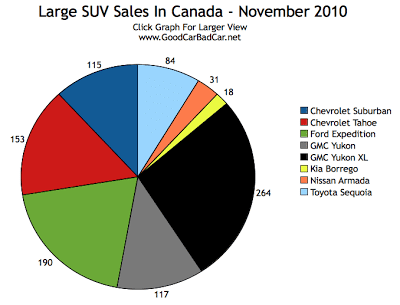