Don’t be fooled: as a trio, GM’s Lambda platform crossovers (Buick Enclave, Chevrolet Traverse, GMC Acadia) are wildly successful; more likely to sell than any other midsize utility vehicle in America. As an individual nameplate, however, the Chevrolet Traverse was America’s favourite midsize SUV/CUV in July 2010. Traverse sales accounted for 9,977 Lambda sales in July, beating out the Ford Edge by a few hundred. The Enclave (5,039) and Acadia (5,574) did alright on their own behalf.

Don’t be surprised if the 2011 Ford Edge ups the Sales Stats ante more aggressively in the coming months. 2011 Edges make 285 or 305 horsepower a very real possibility along with an efficient 2.0L turbocharged 4-cylinder. Edge sales were up 18.9% in July. Granted, the 2011 Ford Explorer could eat away at some potential Edge sales, as well.
In the luxury segment, the Lexus RX350 and Lexus RX450h remain as Lexus’s most effective sales tool. Conquering not only every other midsize luxury utility vehicle but every other vehicle in Lexus’s showroom, too, the RX350/RX450h duo was about three times more popular than the otherwise-quite-successful BMW X5 in July.
Details on mainstream midsize SUV sales and midsize luxury SUV Sales Stats for the month of July 2010 are in the Graphs below. 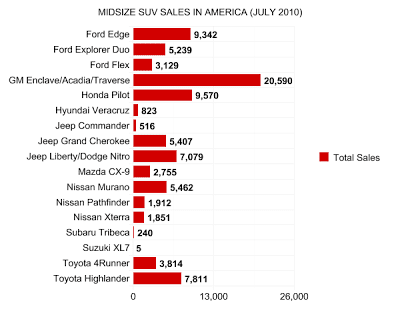 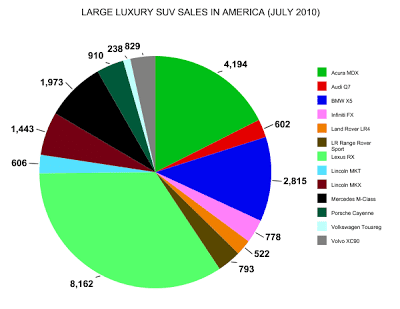