As the first of what will be an ongoing publication, this Graph measuring the Sales Stats of Midsize SUVs was a l’il bit difficult to organize. The Nissan Xterra is no competitor for the Buick Enclave. Yet the Nissan Xterra could easily be seen as a rival of the Toyota 4Runner; which would be an obvious contender for conquest sales of the Toyota Highlander; which is undoubtedly a competitor of the Chevrolet Traverse; the Traverse being a platform-mate of the Buick Enclave. Does this mean the Xterra and Enclave are cross-shopped? Uh… no. But it does land them in the same Graph on GoodCarBadCar.net. The game of “Include Me/Include Me Not” was like picking petals off dandelions – random but not unintentional.

The Lambda platform at General Motors features the top-of-the-line Buick Enclave (4,599 sales in April) as well as GMC’s Acadia (4,877 April sales) and the volume leader, Chevrolet’s Traverse. With over 9,000 sales, the Chevrolet Traverse is one of three in the group below to also be members of April’s Best-Selling SUVs In America list. Other than the Traverse, Honda Pilot, and Ford Edge, six other major sellers came from the Small SUV category. Then there’s the Jeep Wrangler, a traditional SUV which GoodCarBadCar.net will include in a Niche Vehicle sales Graph in a short while.
Enough of the digression. Many of America’s favourite SUVs of the past, a few of America’s favourite current SUVs, and many of America’s least-favourite SUVs are exposed in the Sales Stats below. 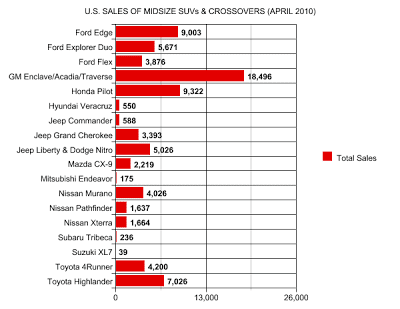