For reasons as varied as the requirement of brevity and the lack of ability to engage readers on every topic, not every car listed in a GoodCarBadCar.net Sales Stats Graph is mentioned when it comes time to actually analyze the figures. For this September 2010 edition of Midsize Car Sales and Midsize Luxury Car Sales in America, that’s gonna change. Below is a comment for each car involved. Just want the straight goods? Scroll down and have a look at the Graphs.

Saying “Volvo” and “wagon” together is like saying “Canada” and “hockey”. It’s just automatically assumed that there’s greatness up in here. Then why doesn’t Volvo sell more V70s (28 in September)? And the S80? Bore. Ing.
The 2011 Saab 9-5 is a looker, a uniquely designed Swedish-American-Dutch sedan that’ll be the only car for certain midsize luxury buyers; not even thinkable as a potential purchase for others. Saab’s former GM luxury partner, Cadillac, is still trying to sell the STS – and doing a better job of it in September 2010 than September 2009 – but it’ll be cool if Spyker-owned Saab can get the 9-5 ahead of the STS in monthly sales figures.
The Lexus GS and ES, along with the Acura RL, are dull members of this field not worthy of acquiring nearly as many buyers as they do. The Acura TL’s strange design at least makes it stand out. Same goes for the Lincoln MKS. Everybody knows the Hyundai Genesis is a favourite at GoodCarBadCar.net. The 2011 Infiniti M37 and M56 are appealing and far more deserving of a look than the outgoing models. Both fortunately and unfortunately for Jaguar, the XF was out-sold by the all-new Jaguar XJ in September. Good, in that the more expensive model sold at a fair clip. Bad, in that the less-expensive car needs greater volume to pull in revenue.
The Audi A6, all-new 2011 BMW 5-Series, and Mercedes-Benz E-Class are the most well-known global players in this class, though that’s not reflected in American September sales. E-Class sales stand at 44,730 through September 30/2010.
As for the mainstream midsizers, greater Volkswagen midsize popularity is found in the Passat CC, parked, ironically enough, in the Niche Car Sales group on GCBC. Toyota Venza sales made up 3546 of the Camry/Venza tandem’s 34,315 in September. Suzuki Kizashi, nobody wants you. The Subaru Outback is one of the most popular Japanese cars in America. Every new Nissan Altima I see makes me think the design is so 2002. Mitsubishi Galant sales fell 51.7% in September 2010. Don’t laugh, Mazda: sales of the 6 fell 21.6%. The 2011 Kia Optima is going to jack Kia sales up another notch. Sales of the 2011 Hyundai Sonata shot up 161% in September, which is sayin’ something, considering the fact that, had Sonata sales stayed level, it would still have been ahead of the 2011 Buick Regal, Optima, 6, Galant, Kizashi, Passat, and the 2999-units sold Legacy. Speaking of the Regal, @asianmartin is blaming the lack of popularity on GM’s marketing.

You might not have exact figures on fleet sales percentages for the Chrysler Sebring and Dodge Avenger, but you, like me, know it’s high. Mercury Milan sales won’t be helping out the Ford Fusion for many months – will Fusion sales rise accordingly? 2507 of the Honda Accord’s 24,127 sales are of the Crosstour variety. I’m working on a conspiracy theory that says Honda’s price for the Crosstour ($29,670) is what Honda pays you, not the other way around. How else to explain 2507 purchases of that thing? Finally, the Chevrolet Malibu: year-to-date sales are up 37.2%. 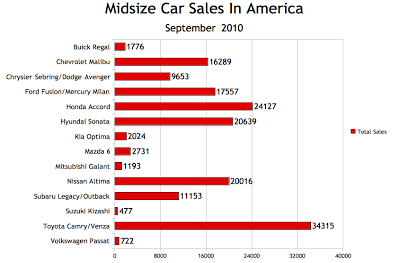 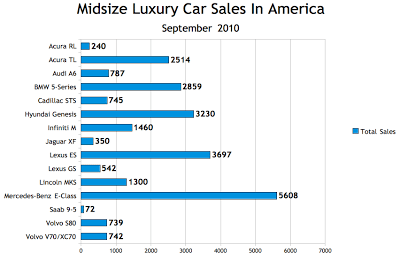